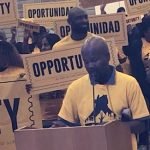 Education rebel with a cause

Until recently, local school boards were run mostly by political players. This Oakland dad represents a new breed of parents who are taking power into their own hands.

Reginald Mosley tried giving the school the benefit of the doubt. Two years ago, the single father of six had moved from Tennessee and enrolled three of his children, ages 5, 6, and 7, in Sankofa Academy in Oakland, California. He and his children liked the community of parents and kids.

But it didn’t take long for Mosley to see the staggering challenges the school faced. It was woefully short on basic supplies like paper and pencils. Too often, the young, inexperienced teaching staff was doing more crowd-control than teaching. Especially troubling: The school test scores were far lower than the state average. Only 7 percent of the children were proficient in math, compared to the state average of 38 percent, and just 11 percent were proficient in English, compared to the state average of 49 percent.

“They were failing the parents and the kids,” says Mosley, who is currently studying to complete a computer programming degree. In his spare time, he tried to lend a hand. He volunteered in his kids’ classrooms and frequently checked in with their teachers to ensure his children were on track. He also attempted to organize a PTA, but gave up due to a lack of interest from other parents and little support from the administration.

Mosley felt this lack of support most especially from the principal. “She wasn’t there for the kids,” says Mosley. “She was just there for herself.”

The printer was the last straw. The school didn’t have one. Some teachers would beg parents to copy worksheets at their offices. Other teachers gave up on handing out homework altogether. Mosley asked the chief information officer at the University of California at Berkeley if the school could donate a printer. They immediately said yes. The principal, Mosley recounts, wasn’t interested in the donation. “I said, ‘Why would you not want a printer if you don’t have one?’ She said, ‘We don’t want junk.’”

When the brand new printer arrived at the school, the principal, says Mosley, remained strangely resistant, almost disdainful, of the much-needed donation. Mosley didn’t stick around to see if the staff ever made use of it. “The day they brought it. I left the school,” says Mosley, who transferred his kids to Montclair Elementary, a higher-performing public school.

His children say they prefer their teachers and their new school, but Montclair is not what Mosley wants for his children.

The biggest issue? In a word, says Mosley, “Race.”

About 70 percent of Sankofa Academy students are African American; only 13 percent of the students at Montclair Elementary are black. Mosley wants the best education for his children and he also wants them to be able to grow up in a community where they are not a tiny minority. He doesn’t want to have to choose between community and academic rigor. Unfortunately, in his experience this is too often the case. Across the nation, lower-income schools, especially those serving mostly African American and Latino students, have fewer resources and place more demands on less-experienced teachers. Perhaps not surprisingly, they also struggle to meet basic academic standards.

“There are schools that have, and schools that don’t have,” says Mosley. After witnessing a system he feels is broken, Mosley intends to change that equation. In short order, he’s become one of those uber-active parents. He serves on Montclair’s student site council (SSC). He started an English Language Learners (ELL) Committee. When faced with pushback on the need for one, he says he calmly but firmly informed the principal, “It’s against law not to have one.”

Next, he’s taking his mission to the top by running for the school board. Sitting on a board of four to seven people, parents like Mosley can make sweeping changes that will allow them to improve thousands of students’ lives. Indeed there is a national campaign to get more people like Mosley involved with their local school board.

The making of an activist

Mosley had never even attended a local school board meeting before he considered running. So he started attending meetings twice a month. “It’s important parents attend to see what’s going on, and if the school board is advocating for them,” says Mosley, who found a support base through The Oakland REACH, a parent-empowerment organization that helped train Mosley to become an effective education activist.

“We’re focusing on disrupting the system and empowering parents to focus on their kids,” says Lakisha Young, executive director and founder of The Oakland REACH, a nonprofit that educates parents on improving their schools. “It’s huge to show power to power; the power of parents in numbers communicating to decision-makers. That’s a whole different orientation rather than just talking to your teacher and principal.”

Historically, the American education system requires a lot involvement from parents. Parents volunteer in the schools, raise money for the PTO, organize reading clubs, and drive carpools for sports teams. But nationwide, organizations like The Oakland REACH are cultivating a new generation of parent leaders who want to make a deep and lasting impact on their school system. They’re fighting for educational equity in their communities with hope of leveling the disparity between the haves and have-nots.

This nationwide trend is evidenced by a new breed of parent-empowerment organizations, many of which didn’t exist 10 years ago, including Innovate Public Schools, which has five California bases; Parent Revolution in L.A; Houston’s Families Empowered; PAVE in Washington state; and the NYC Coalition for Educational Justice. Each of these organizations focus on training and mobilizing parents to become leaders in transforming public education.

“These parents aren’t necessarily part of the PTA,” says Young. “But they are strong advocates for their child. If you get a bunch of troublemakers together, you can do some stuff!”

Taking power into their own hands by running for school board

Mosley laughs when asked if he is just such a troublemaker. “Yes, I feel there are people who think that way about me. When you are being a troublemaker, you keep calm, you don’t get too excited and don’t focus on anything other than the facts.” For Mosley, “the facts” mean pushing the school and district to adhere to the law so that, he says, “every child has that basic American right, an equal opportunity to a good education.”

To date, through intensive canvassing, Young says her organization has had more than 4,500 one-on-one conversations with Oakland parents and put 250 of them through a six-week training program called Oakland Family Advocacy Fellowship. Having completed his fellowship, Mosley knows that this is just the first stretch of the marathon he’s committed to in running for a spot on the school board in 2020.

While most school boards nationwide are populated with political players with plenty of financial resources, Mosley says he’s undeterred. “It will require a lot of time and effort and energy. But I’m willing to go through it.” Along with getting an education, and much guidance, from The Oakland REACH, he’s also involved in GO Public Schools Oakland, another educational advocacy group.

In the run up to his campaign, Mosley is a star student, diligently doing extra homework by attending meetings every Wednesday night, alternating between Oakland Unified School District’s (OUSD) school board meetings and PTA meeting at his kids’ school. For tips and tactics on launching a school board campaign, go here.

At a recent OUSD school board meeting, Mosley sits quietly among the large crowd of frustrated parents and students, who are demanding that a cut food program be reinstated, and OUSD staff, who have various demands and grievances. A long line has formed of people waiting to step up to the microphone to address the school board sitting up on the stage. Just recently, Mosley has felt confident enough to stand up and speak to those in power. But at this particular meeting, Mosley intentionally stays seated the entire time, listening. This, he says, is also his strategy: Rather than blustering thoughtlessly ahead, he is carefully watching what to do (and what not to do) so that he can be the most effective possible school board member.

“If I want things to be different, how do I do it?”