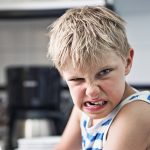 Your 1st or 2nd grader and anger

When young kids have big feelings, here are 8 ways parents can help them feel better now and in the long run.

When Melanie’s 7-year-old son, Charlie*, was a little boy, he would frequently erupt with full-blown temper tantrums. She figured tantrums came with the toddler territory. But she was taken by surprise when his anger intensified as he grew older. “I had an unrealistic expectation he would grow out of it. His anger has evolved to be more physical and saying things that hurt my feelings.”

Melanie tried everything she could think of to help weather her son’s emotional storms. When she met his anger with anger of her own, it only made things worse. So did taking away a toy or privilege. When the pandemic hit, his outbursts grew more explosive. “All his life, he’s been impulsive and quick to have big emotions,” says Melanie. “Those have all been exacerbated in the pandemic.”

The standard, generations-old approach to a child’s anger is some form of discipline. Take away screen time. Send them to a “think about what you’ve done” time-out. Have a stern talk. Or worse, responding with some form of severe punishment. But positive discipline experts say that these approaches do little to temper a child’s temper. Why? Because, adults too often focus on the anger itself, when in fact anger is a symptom that’s masking other emotions that the child may not know (yet) how to identify and regulate.

The goal is to stop seeing an angry child as, well, an angry child. Instead, parents will have more success looking beyond the outburst and get curious about what’s going on inside their unhappy first or second grader.

Look beyond the anger (and see your child)

“Regardless of how angry your kid is, one of your best strategies is to identify what feeling your kid is covering up,” explains child development expert Jane Nelsen, author of the popular Positive Discipline series. Anger can disguise sadness that a classmate was unkind, jealousy when they think a parent prefers a sibling, shame that they haven’t mastered how to ride their bike. Often a child this age is acting out because they are afraid of disappointing their parents. They are terrified that if they aren’t the child they think their parents expect them to be, they’ll stop loving them.

Melanie saw this was true for Charlie. “His frustration and self-doubt comes out in bursts of anger,” she says. “When he’s angry it’s because he thinks he’s not able to do something, like a school assignment. He’ll scream, ‘I don’t think I’m good enough!’” So what could look like an angry child is, on closer inspection, a child in emotional pain.

Another long-held belief about children and anger is that kids shouldn’t get mad. A “good” child is well-behaved and pleasant. A “bad” child gets mad, either overtly by yelling or physically acting out or more subtly by sulking or whining. Positive discipline experts urge today’s parents to reconsider these beliefs.

“Getting upset is a normal part of life, and kids feel things intensely,” says Dr. Nanika Coor, a Brooklyn-based clinical psychologist who specializes in working with parents. Coor stresses the importance of recognizing that at this young age, kids are going through dramatic social, emotional, and cognitive growth that means they’re dealing with a lot of big and confusing new feelings. “They have underdeveloped impulse control and emotional regulation,” says Coor. “It’s developmentally normal for a young child to lose control emotionally.”

Let them be mad

While it can be difficult, it does wonders for a child to allow them to express their feelings, however stormy. Simply giving your child permission to be angry can, counterintuitively, help kids feel less angry in the long run. The reason, explains Coor, is that “kids who feel seen and heard feel understood. It also helps them feel safe because they aren’t worried their parents will reject them if they are feeling bad.”

Coor says that in a typical first or second grader’s outburst, “They might cry, yell, slam doors, and stomp.” It takes resolve to stay calm, but try your best to focus and listen to what your child is communicating, instead of reacting to the anger itself.

“Validate their rage and the underlying upset, whether you agree or not.” This could mean saying, “I see you’re really angry about me saying you had to stop playing your game.” By listening and respecting their feelings, “You’ll help a child move past the anger into the deeper emotion.”

Coor believes parents are far too quick to rush to punishment, insisting it rarely solves any problem and usually makes it worse. “You can’t punish away feelings,” says Coor. “Their anger means they feel unsafe and their system, in fight or flight, is responding to a perceived threat… They need to start feeling safe to calm down.”

Be their emotional role model

To help a stressed (aka angry) child calm down, Coor suggests saying something to the effect of, I see things are spilling out of you. You are not alone. I’m going to stay with you. Offer a hug or a cuddle. Let your child know that you want to hear what they have to say. Once everybody has calmed down, then you can have a conversation about what was happening for your child when they erupted. Although at this age they may not know, you can help your child learn to identify and name emotions, such as mad, sad, frustrated, left out, disappointed, etc., which helps kids learn to understand and better process their anger as they grow. It’s also a good time to talk about what might help your child feel less out of control next time. This is also the moment, says Coor, to apologize to your child if you lost your cool. That way, you can model for your child how to accept responsibility for unkind behavior, how to apologize, and forgive.

Coor says that the older model of parenting is to have power over a child. But it’s more powerful to meet a child’s anger with empathy. “Meeting a child’s intense emotions with empathy lets them know that you understand how hard it is for them at that moment.”

Each time a child’s strong emotions are met with understanding — and ideally, calm — they are taking cues on how to self-regulate. Teaching your child how to self-regulate so they can safely calm down will do wonders both in the moment and in the long-run, as they grow up into teens and adults who can regulate difficult emotions.

After you both find some calm, ask your child why they’re angry. Nelsen says that this simple technique almost always works. Children will often find words to say why they are mad, if only the parent will listen. Children will also tell you what helps them feel less mad.

As you talk through what happened while your child was angry, use “I” statements, such as, “I felt hurt when you spoke to me that way,” to help your child reflect not only on how they felt, but how their actions made each of you feel. Recognizing and naming these emotions will help your little one build the emotional vocabulary and self-awareness to better handle difficult emotions the next time.

Make sure it’s not something more serious

If your child’s anger seems extreme, it’s worth seeking help from a therapist. Many children who struggle with extreme emotions suffer from ADHD or/and Oppositional Defiant Disorder. “If you have a really volatile kid,” says Coor, “I would go for help.”

Also, some children, like Charlie, become so unhappy that they become hopeless. Months into the pandemic, Charlie was telling his mother he wanted to die. Now, Charlie is seeing a therapist. Through their work with the psychologist, Melanie has realized many of Charlie’s outbursts have to do with his feelings of self-worth.

Finding what works for your child

By talking about what makes him happy, Charlie has helped his mother figure out better ways to deal with his anger. “He’ll tell me, ‘I love it when you’re a silly mom,” says Melanie. “Knowing that about him, sometimes I will grab and hold him and give him a raspberry on his arm, which he thinks is so funny. There’s something about that physical touch and sound that gets him laughing, so it’s hard for him to be angry anymore.”

By going straight to the source — your own child — a parent can learn a lot. At this young age, your child may not always know why they are feeling mad, but they probably can help you make them feel safer and less out of control. After all, while anger can be scary for a parent, it can be terrifying for your young child. For Charlie, the answer to, “What helps you not feel mad?” The answer is an easy and unequivocal: “My Mommy’s snuggles!”

* Charlie’s name has been changed to protect his privacy.