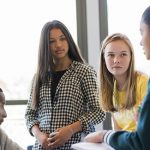 Many schools have discovered that valuing traditionally underserved students' cultural and individual identities contributes to their long-term success.

KIPP Academy Lynn Collegiate High School had a problem. But it wasn’t their academics. The charter school in Lynn, MA had an admirable track record of delivering a strong education and preparing Black and Latinx students from low-income households for college.

“Our academics were above grade level or at grade level,” says Nikki Barnes, executive director at KIPP Massachusetts (KIPPMA), which oversees the state’s KIPP charter schools.

But a survey of alumni revealed a surprising truth that Lynn Academy’s high test scores, grades, and college admissions didn’t. Yes, students were equipped for college or careers academically. But after graduation, many of them reported feeling lost after leaving the strict and structured school. Barnes explains that many said they didn’t know how to manage their time, to be advocates for themselves, to think independently — all crucial skills for post-graduation success.

Broadening the meaning of “school success”

KIPPMA’s administration took the feedback to heart, recognizing that prioritizing defined academics did a disservice to their many Black and Latinx students. They were overlooking these teenagers’ cultures and very identities. If the high school’s narrow academic approach left students with few tools to navigate the greater world, its strict disciplinary codes added insult to injury. The school consistently reported high suspension rates — even among students with disabilities. Not wearing a belt to school was included as one of the many reasons a student could be suspended.

But that, says Alvaro Peters, Lynn Academy’s principal of 9th and 10th grades, was “the old KIPPMA.” Over the past 5 years, the school has been going down a path away from the former military-style, high-scores-at-all-costs education.

“Our discipline system was all about compliance and not engagement,” Barnes says. “So we asked, ‘How do we get kids engaged in learning?'”

The answer, Barnes explains, was to embrace an educational approach known as culturally responsive teaching. Culturally responsive teaching can mean different things at different schools, including updating the curriculum so that students see themselves reflected in the texts they read or encouraging students to draw on their lived experience in their projects. At Lynn Academy, instead of employing authoritarian methods to achieve excellence — a common approach in many schools serving students living in low-income neighborhoods — the goal was to reach children by creating a culturally inclusive environment. This form of teaching recognizes and embraces the full spectrum of students’ backgrounds, and invites them to creatively draw from their cultures so they feel more valued and included in their education.

Recognizing that many schools, especially those in neighborhoods that are marginalized, have a linguistically and culturally diverse student body, culturally responsive teaching aims to go beyond the often limiting curriculum based on a culture of whiteness that excludes far too many students.

“We need to empower our families and our students,” Barnes says. They do that by “ensuring our students are engaged using culturally relevant pedagogy.” Like other schools that have adopted culturally responsive pedagogy, KIPPMA, can be “a place where Black and Brown people survive and thrive,” she says.

In her book, Culturally Responsive Teaching and The Brain, educator Zaretta Hammond offers a way to retrain teachers to successfully integrate students’ cultures into the curriculum and to foster an academically rigorous, healthy, and affirming environment for students who are marginalized. Intentionally inclusive instruction helps students’ brain development, moving them from dependent to independent thinkers.

“If we want to help dependent learners do more higher-order thinking and problem-solving,” Hammond writes, “then we have to access their brain’s cognitive structures to deliver culturally responsive instruction.”

At KIPPMA, Peters and Barnes attribute some of their past struggles to having a mostly white staff that lacked the cultural literacy needed to properly serve its diverse student body. “For years, most of the teachers were white and for years, we had a lot of controlling and compliance of students’ bodies,” Barnes says. “We didn’t have a warm and demanding space. We had a demanding space.”

Peters says when he started in 2016 there were only four people of color working at the high school. Now, more than half the staff are people of color. “In our interview process, we ask [potential teachers], ‘What are your blind spots? We want to know who is a good fit culturally for our kids.” They screen carefully, he adds, because, “We don’t want any person to come into our community and cause harm, particularly in areas of justice. We want our place to be healing, and we want to hire staff that align with our mission.”

Recognizing a rich cultural past and present

Lynn Academy serves predominantly students of color: 65 percent Latinx, 25 percent Black, and only 5 percent white. The school provides free lunch for every student, no matter their economic status. Peters says most students come from working-class families. Many parents have two or three jobs.

Even before the school embraced culturally responsive teaching, students were learning about politics and current events — including culturally relevant topics like racism and genocide — in their Speech and Composition class. But when the teacher left for another school, Peters filled that position, changing the class name to Activism and Advocacy, and dramatically changing the class content. “That was the beginning of a set curriculum that talked about race, class, gender, sexuality, and immigration,” Peters says. “As students began to learn the material in the classrooms, you would see them … sometimes challenging teachers [on things they said].”

Working toward justice and equity in the classroom

To reduce school suspensions, during the 2018-19 school year high school administrators began to implement restorative justice practices. When a relationship between a student and teacher or facilitator or two students is fractured or in turmoil, instead of looking to suspend the student as a first response, Peters or a dean mediates conversations between the two parties with the hope of restoring the relationship. This in turn can create a safer space for children to learn, a key component of culturally responsive teaching.

Embracing a new direction has also meant retraining teachers to become aware of their implicit biases so they can be more sensitive to the students and their unique cultures. Barnes says around 2017-18, a group of KIPP leaders visited a number of their schools to see if they were upholding their commitment to equity. They realized they still had a long way to go to change the school culture so students could become genuinely enthusiastic learners. “We further uncovered that our students were compliant, but not engaged,” Barnes says.

In response, the following school year in 2018-19, the KIPP administration invited teachers and executive directors to attend professional development training on racism and equity. During that year, KIPP charter school teachers and executive directors learned — some for the first time — about redlining, the impact of racial segregation, and that race is a construct with devastating consequences. Barnes said this deep dive into the undermining and sidelining of so many cultures is what led KIPPMA to address its own problematic school policies. (Related: What is an anti-racist school?)

Being honest about bias

Hammond writes that every teacher must arrive at an awareness that we live in a racialized world, one which, “gives unearned privileges to some while others experience unearned disadvantages due to race, gender, class and language.” By recognizing the role these inequities play in education, teachers can then work to rebuild a school environment that reduces harm to students from marginalized groups by supporting their individuality and culture.

Barnes says culturally responsive teaching is not just about teaching white educators to be aware of their implicit biases. People of color have also internalized implicit bias from living in a society still segregated by race and socioeconomic status. Offering herself as an example, Barnes says her identity as a credentialed, able-bodied Black woman could impact the way she interacts with students. “It’s about unpacking what it means to navigate a world where whiteness is the standard and to acknowledge your biases,” Barnes says, “and then build… academic experiences that attune to children’s academic mindset.”

KIPP Academy’s administrators assess teachers’ curriculums to make sure teachers are in line with the school’s goal of implementing culturally responsive teaching. Peters meets with teachers to evaluate their lesson plans through the lens of equity, asking questions about the materials they choose to use or even choose not to use.

Because culturally responsive teaching is centered around addressing students’ needs, teachers and career counselors also work to help them achieve their post-graduate dreams. This focus on each student’s individual pathway is so important that KIPPMA now measures its success against the success of the alumni, whether that means college or career. Moving away from its former almost single-minded focus of sending graduates to 4-year colleges, in the upcoming school year juniors will be assigned a postsecondary match counselor, who will also help students attend trade schools if they like so they will have tools to enter the workforce.

The school also partners with outside institutions to bring new learning experiences that prepare students for their future. Some students have participated in summer programs like Summer Search, an organization that offers students from low-income families a range of international experiences and mentorship, and SMASH, a program that helps students learn about careers in STEM. They also provide students with political internship opportunities where students gain knowledge about local politics.

In keeping with a culturally supportive focus, the school works to stay connected to its immediate community. Before COVID-19, KIPP Academy hosted adult education classes that taught free English and citizenship classes to immigrants, and held exercise classes in the cafeteria. “It was a way for our schools to partner with our community,” Peters explains. “To say, ‘Hey, we want to give you these resources.'”

The school also makes efforts to gather feedback from their families, meeting frequently with parents for their input. Peters says it helps them to figure out what is (and isn’t) working. When it comes to parent-teacher meetings, for example, those meetings are not strictly about informing parents of their children’s academics or behavior. He says their goal is to understand students’ educational experiences through their parents’ eyes.

While they are making changes, Barnes says they haven’t arrived. The administration is still on a mission to remake KIPPMA so that it can better serve students of color from low-income households. Barnes, who has been employed at KIPP since 1991, says the organization hasn’t arrived, but she has stayed there because it challenges itself to be better at serving students. “We have not arrived, be we grow,” Barnes says.

How to learn more about culturally responsive teaching

For teachers and administrators:

This article is part of our Transforming High School series, a collection of stories, videos, and podcasts exploring the practices that prepare students for success in college and beyond.