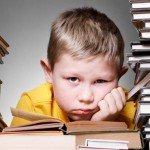 Who's killing our kids' love of reading? Readicide's Kelly Gallagher investigates what’s behind this educational crime and how to revive a child’s passion for the written word.

Call it an educational injustice – one too many parents have seen befall their own children. One day your 5-year-old is pleading that you read, “Just one more story!” A few years later, your once-upon-a-time book lover has been replaced by a child who utters this blasphemy: “I hate reading!”

These kids are victims, claims Kelly Gallagher, of “readicide,” a senseless crime against the humanities in which well-meaning educational practices suck the pleasure out of one of life’s great joys and an essential building block to academic success.

Gallagher, who has been teaching high school English in Anaheim, California school for 28 years, reveals how parents and schools can prevent kids from falling prey to readicide, the dangers of “word poverty,” and the transformative benefits of “stupid reading.”

is a catchy title for a book, 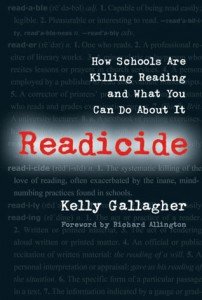 but are things really so grave as to suggest that society – and schools in particular – are destroying this generation’s love of reading?

Kelly: More than ever, there are forces out there that are attempting to take kids away from reading. Some of those forces – which I argue in some of my books are well-intentioned – can play a part in creating kids who don’t like to read and some of the practices in schools contribute to it.

GreatSchools: How are schools implicated in killing kids’ love of reading?

Kelly: Schools have become so test-results driven, they’ve lost focus on developing lifelong readers and have instead used all their focus to create test takers. I think that schools, in the shadow of all the testing pressures, have lost their way when it comes to the idea of recreational reading and developing lifelong readers. I’m not necessarily impressed with schools that radically raise their test scores. In some ways, that’s almost a red flag, because the wrong message might be given to kids in terms of reading. I’m a strong proponent of teaching kids to read academically, but if that’s the only reading they’re doing, they’re going to burn-out. My own two daughters, they were on the academic track, but the schools were so test-driven, the schools came pretty darn close to killing their love of reading.

GreatSchools: I’m assuming you were able to preserve it for them?

Kelly: Absolutely I did. The earlier you start, the easier it is. Reading is intrinsically enjoyable. As soon as my daughters were able to sit up – when they were six months old – I read to them and I read to them through middle school until they wouldn’t listen anymore. If my kids misbehaved the punishment was: “You don’t get to read tonight.” That framed it as a valuable activity. But parents have to be careful not to make it a punishment this way: “You’re not going out until you read at least an hour.” I would say to my girls, “You can watch TV, but let’s get the reading done first.”

GreatSchools: That’s another difficulty for parents: the competition of the glowing screen. I especially have that problem with my teenage son.

Kelly: That’s a whole different issue; that’s a boys’ literacy issue. Girls as a class are far outpacing boys. Jim Trelease, who wrote the The Read-Aloud Handbook, would say part of the problem with boys is electronics and part of the problem is fathers. Fathers take time to take boys to the ball game on Friday, but they should also take time to take them to the library on Saturday.

GreatSchools: You write about the necessity of kids being exposed to words – whether you’re talking to them or reading to them – from early on to get them on the right track.

Kelly: Even before kids get to kindergarten, it’s important that parents expose their children to as much language as possible. A child’s level of literacy entering kindergarten is a strong indicator of where that child is going to end up in 12th grade. As far as exposure to language, it really is an early-developing-literacy issue. It’s not an IQ issue: it’s an access- to-language issue, it’s an access-to-words issue, it’s a poverty issue. Children from high-income families are exposed to a lot more language than either middle-class kids or kids who come from poverty. That’s not true of every kid, but generally speaking, those are the trends. If your parents see the value of literacy, literacy will develop. I see this with my own students, students who are very, very smart, but they suffer from word poverty. When you have a limited vocabulary, it limits your thinking. You need to read stuff to know stuff. A lot of kids in upper-grade levels can decode but comprehension is not going to happen.

GreatSchools: So the kids who experience “word poverty” pay a big price for it?

Kelly: I stand at the K12 finish line. I teach seniors. If you look at my class, you can point to the kid who loves to read and to the kid who doesn’t love to read. I’ve seen it over the years: good things happen to readers. Almost without exception, my 12th grade students who score high in the verbal ACT or SAT have all been lifelong readers. In fact, I can predict which student is going to score high in the SAT verbal section.

GreatSchools: Along with reading to your child, how do you grow a lifelong reader?

But even parents who have a lot of books in the house, who encourage their children to read and who read to their children, can end up with a child who spurns reading. What to do if your child has fallen off the reading cliff?

First of all, I’d go into the school and express concerns of what’s happening to my child as a reader. Outside of school, I’d go to nontraditional print. You want to make sure your kids are surrounded with high-interest recreational reading.

Kelly: As an adult, I love Shakespeare, but I don’t curl up with Shakespeare. I read crime novels. I read things that are interesting to me. I think when kids are really young, they need a lot more stupid reading.

? That was my son’s gateway drug to reading.

talks about stupid reading. Stupid reading turns into lifelong readers. Use comic books, magazines, digital print, graphic novels. I’d get Sports Illustrated or Sports Illustrated for Kids. I’d go to a massive bookstore and say, “You get to pick a book.” A lot of kids say they don’t like to read, but they’re wrong. I can take the most reluctant reader and turn them around. I can take any senior and find a book the senior wants to read. It’s a question of matching kids to the right kind of text.

GreatSchools: Parents obviously have more control at home, but what about in the classroom?

Kelly: If I were a parent of a young child, the first thing I’d want to see when I walk into a classroom is a classroom library, and I’d want to see my kid surrounded by lots of things to read. In school, they need to have access to text. You can’t be a swimmer if there’s no water in the pool. You’ll see a lot of [great books in] lower elementary, but it’s amazing to me how in many middle and high schools, kids don’t have access to anything interesting to read. There’s a precipitous drop off of reading at 13 – that’s the age where it really hits. I’m a big proponent of teaching classics; there’s value in Romeo and Juliet that doesn’t come in reading Sweet Valley High, but the balance has gotten way out of whack. I think half the reading at school should be recreational and I see schools where there’s zero recreational reading. If I had to do the reading they have to do in school, I wouldn’t like to read. When was last time you curled up and read a textbook over the weekend?

GreatSchools: But what if kids’ recreational reading doesn’t challenge them so they don’t grow as readers?

Kelly: It is the teacher’s job to give kids books that are a little bit too hard. But if all the reading they’re doing is too hard, if it’s not mixed with a “just right book,” you’ve lost them. The irony of schools removing so much recreational reading is that kids who read the most, read the best. It shouldn’t be an “either/or.” It should be, “Let’s get kids to read as many pages as possible.” That should be the goal. The kids who read the most actually write the best. There are things that happen to your writing when you’re a prolific reader. Worse, a lot of kids who don’t like reading are put in situations where they’re doing even less reading. They are getting the exact opposite treatment.

GreatSchools: What’s your take on the new Common Core Standards?

Kelly: I’m a moderate on it. I think the actual standards themselves on paper are a clear improvement over the standards we’re leaving in the NCLB [No Child Left Behind] era. If my students could do what those standards are asking the students to do, they’d be much richer thinkers. That’s the good news.

The bad news is I’m disappointed they don’t do a better job of addressing recreational reading. They almost ignore it completely. There are no specific goals for readers. How many books should you be reading per year? And the whole fiction versus nonfiction debate has been widely misunderstood by teachers. Common Core says 70 percent of reading should be nonfiction, 30 percent should be literary. In 12th grade where that’s being misinterpreted, that doesn’t mean a 70/30 split in English, that means campus-wide. Some English teachers have wrongly interpreted that to mean kids should be doing tons of nonfiction, but poetry and fiction is core. There’s a kind of thinking when you read a novel that’s different from the kind of thinking you do when you read a textbook.

GreatSchools: When should you stop reading aloud to your child? The answer might surprise you …