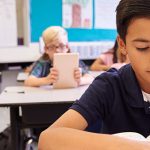 Sixth grade reading entails understanding plot structures, narrative voices, character developments, and the use of language. Students also compare and contrast themes in articles and stories. In the process, your child’s vocabulary should grow by leaps and bounds.

Sixth graders need to cite evidence from what they read to support their analysis of the fiction and nonfiction they study. To answer questions, students learn the key difference between evidence and inference. Evidence refers to the examples, quotes, and facts from a text that supports an idea. Inference refers to the conclusions and interpretations you reach based on that evidence.

Sample evidence question: In The Great Fire by Jim Murphy, do the poor neighborhoods of Chicago burn up faster than the wealthy sections? Show evidence in the text to support your answer.

Sample inference question: In Treasure Island by Robert Louis Stevenson, is the boy Jim seeking a father figure to help him grow up? Where is this indicated?

If you want to strengthen these skills, keep asking those two magic questions: What do you think? and How do you know?

So much to remember, my brain hurts!

Young children easily remember what happens in the books parents read to them, but in sixth grade, the demands on their memory rise sharply. Suddenly, kids are expected to decipher philosophical themes of fiction, identify central ideas in nonfiction, and support their views with specific details. To collect evidence, students need to carefully read, re-read, understand, and remember the text using strategy tools like highlighting, taking notes, using post-its to mark key scenes or passages, using a technique called intellectual graffiti, and outlining chapters.

One crazy scene after another

Sixth graders learn that a novel’s plot unfolds in a sequence of episodes. Dramatic episodes have consequences that lead to future situations with repercussions; these situations crescendo to a climax and resolve in a conclusion. To help them understand, kids learn to make plot diagrams.

When reading nonfiction, kids learn to analyze how key events, individuals, or ideas are introduced, portrayed, and developed. In both cases this analysis of how texts are structured involves identifying how parts of a story or argument build to make a whole.

Sample fiction question: In Lions of Little Rock, two girls form a dangerous and clandestine friendship, forbidden due to racial segregation. Name, in chronological order, the multiple episodes of racist threats and violence that increase the tension.

Sample nonfiction question: In Shipwreck at the Bottom of the World: The Extraordinary True Story of Shackleton and The Endurance by Jennifer Armstrong, the survival of the crew depends on leadership. Describe the sequence of decisions Ernest Shackelton makes that earn him the crew’s trust.

The real-world purpose of all of this highfalutin analysis? Helping kids develop the strategic thinking skills to help them break down and tackle complex problems.

Characters in a successful novel are deeply impacted by life-changing events in the plot. Personalities are psychologically challenged and often transformed by the situational demands. Like little armchair psychologists, sixth graders learn to recognize and explain these shifts in attitude and disposition.

Sample character-development question: In The Black Stallion by Walter Farley, the teenage protagonist is introduced as a timid boy. Does his personality change in the course of events? Why?

A great way to reinforce this skill is to indulge in some serious gossip about characters in your child’s favorite book or movie. Why did he act that way? Didn’t he know he would get in trouble?

Throughout the year, kids are expected to expand their vocabularies by learning academic vocabulary words and technical words, both of which are prevalent in nonfiction. Academic vocabulary words include nuanced words such as exasperation and unruly, as well as technical words used in specific fields such as nucleus (science) and artery (medical). When kids encounter a new word, they should try to figure out the meaning from context as they have in years past, but they also learn to recognize Greek and Latin roots, prefixes, and suffixes, such as auto, bio, and chron and ambi, aqua, and sent. Kids are also expected to look up words — without prodding — in the glossary, dictionary, or thesaurus to understand exactly how a word is being used.

In addition to acquiring new words, sixth graders start to understand the precise intention of words and phrases used in fiction and nonfiction. Sixth graders need to identify many of the English language’s 250 common figures of speech (similes, metaphors, hyperbole, personification, synecdoche) and interpret their meaning within various contexts. Kids also learn to identify connotative language (the positive and negative associations words carry with them) and how to distinguish connotative words by understanding each word’s precise meaning. Finally, students learn that nuance is small degrees of change in a word or the text’s message or mood.

Using these language skills, kids are asked to analyze the meaning and tone of specific word choices:

Figurative language example: In Because of Winn-Dixie, what does the hyperbolic metaphor “she could stick a tire in the ground and grow a car” mean?

Word choice example: In The Golden Compass: His Dark Materials, the character Iorek Byrnison is a panserbjørn who wears armor made of “sky iron.” Why did the author select the words “sky iron”?

In sixth grade, students are expected to understand and explain how text elements in fiction and nonfiction — sentences, stanzas, paragraphs, chapters, sections, or graphics — are indispensably intertwined with other elements and how they contribute to the plot, theme, structure, and development of the text’s ideas and themes.

Sixth graders learn the many narrative options in novels — and how to identify and characterize the narrator in what they read. Narrator options include:

In nonfiction, sixth graders learn how to determine the author’s point of view and intention by providing evidence in the text.

Sample question about an author’s intention: In Oh Rats! The Story of Rats and People by Albert Marrin, does the author believe the rodents are always dangerous?

The movie vs. the book and other comparisons

Sixth graders learn to compare the experience of reading a book or poem to that of watching (or listening to) a film, play, or audio adaptation. Did the student imagine the same images and sounds in their reading as the multimedia version displayed?

Sample book vs. movie question: Do the sisters in the 1994 film Little Women resemble the characters you imagined when you read Louisa May Alcott’s novel? (Related: Check out our list of great 6th grade books that were made into movies.)

Sample question about comparing two texts: The topic of Christianity is examined in both Avi’s historical novel, Crispin, and C.S. Lewis’ novel The Lion, the Witch and the Wardrobe. Compare and contrast the two approaches.

Sample question about comparing two authors’ accounts: Compare and contrast the internal motivations driving the 26th President as depicted in Albert Marrin’s biography, The Great Adventure: Theodore Roosevelt and the Rise of Modern America, and the former president’s autobiography, Adventures of Theodore Roosevelt.

There’s a push at all reading levels to have kids challenge themselves by reading poems, stories, and nonfiction above their grade level. For sixth graders, that means diving into the sixth- to eighth-grade complexity band. (See our list of complex books for sixth graders.) Grasping texts aimed at big eighth graders, like Gulliver’s Travels, can be daunting for sixth graders. To scale this challenge, kids should get something called “scaffolding” to help them climb to new reading heights. What does this mean? Lots of support in all sorts of ways. For instance, you might read a passage aloud to your child. Or if your child is struggling with a particular book, have them reread just the first paragraph then discuss it before moving on to the second paragraph. Sometimes all it takes is having a conversation about what they don’t understand to help your child get past their confusion. The important thing to remember is that it’s all in an effort to help readers with Lilliputian skills expand their reading ability to Brobdingnag proportions.

In sixth grade, reading includes more than just words. Kids need to integrate information from a wide variety of visual, oral, quantitative, and multimedia formats, including graphs, charts, maps, tables, slide shows, speeches, interviews, and videos. This is different than years past, when academics only included the written form and non-written assignments were the fun stuff. The upshot for you? Your child’s multimedia assignments may be just as challenging as their textual reading and writing assignments, so they’ll likely need to allocate just as much time and energy to them.

Talking it all out

So, how can you see these skills in action? Obviously in your child’s writing projects, but also in discussions about what your child has read. Sixth graders should read to prepare for discussions and reference evidence when they speak — whether they’re doing a formal presentation, participating in a conversation, responding to a classmate’s question, or rebutting an opposing viewpoint. And at home, these ideas can liven up your dinner conversations and rush hour commutes.