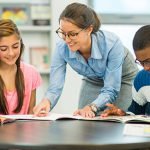 Students analyze the language, structure, and themes in both literature and nonfiction and explore how new works reinterpret classic myths and legends.

This year your child will gain a deeper understanding of literary texts by looking closely at language. They’ll identify figurative language, verbal irony, related words, and Greek and Latin roots. They’ll also sharpen their critical thinking skills by scrutinizing an author’s narrative decisions and point of view in fiction and nonfiction works.

My point is proven in plenty of passages

This year the focus on evidence continues: kids learn to identify evidence in what they’re reading, then draw inferences from the evidence they find. (Evidence is information collected via analysis. Inference refers to conclusions a reader arrives at based on evidence gathered.)

Sample evidence question: In the novel Of Mice and Men by John Steinbeck, what evidence points to “loneliness” as a major theme?

Sample inference question: In Guns, Germs, and Steel: The Fates of Human Societies how does the author Jared Diamond show how societies living in a geography that provides an abundance of food influences their progress?

The book says… what?

Eighth graders critique fiction and nonfiction books by breaking them down into their many elements. They look at themes, central ideas, supporting ideas, plots, settings, and characters. Students also learn to write objective summaries of the texts and outline the content.

Sample fiction theme question: In the novel The Maze Runner, how does author James Dasher develop “manipulation” as a theme in the plot and setting?

Sample nonfiction secondary meaning question: In Sugar Changed the World: A Story of Magic, Spice, Slavery, Freedom, and Science Themes by Marc Aronson, how does the secondary idea of “slavery” relate to the central idea, that sugar’s explosive development was due to economic gain?

Eighth graders learn to examine which literary elements and devices influence the plot in stories and drama.

Sample single-line-importance question: In Speak by Laurie Halse Anderson, what theme is revealed when Rachel silently mouths the words “I hate you” to Melinda, in chapter one?

Why did the author use that word?

Eighth graders learn to understand the intention of words and phrases used in fiction and nonfiction texts.

Sample figurative language question: In Mockingjay by Suzanne Collins, the heroine Katniss Everdeen is called “the Mockingjay.” What does this metaphor symbolize?

Sample connotative language question: In The Outsiders by S. E. Hinton, the “Greasers” often use the word “tuff.” What personality traits are associated with “tuff”?

Sample technical language question: In World Without Fish by Mark Kurlansky, what is the definition and purpose of the term “Cambrian Era”?

Sample specific word choice question: In Lord of the Flies by William Golding, why is the beautiful island described with foreboding adjectives, like “darkness of the forest”, “broken trunks,” and “cables of creepers“?

Sample analogues and allusions question: How is Watership Down by Richard Adams similar to the epic Aeneid by Virgil?

Dramatic irony is created in fiction and drama when the audience understands the situation or dialogue, but the characters do not. This technique can provide suspense and humor.

Sample dramatic irony question: In Oedipus Rex by Sophocles, what horrible truth is the audience aware of, that the title character remains ignorant of, until the end?

Was the movie better than the book?

Eighth graders also analyze how movies based on books stick to or stray away from the original text. Students evaluate the choices made by the screenwriter, director, and actors.

Sample film-versus-book question: How do the plot and characters in the movie Twilight differ from those in Stephanie Meyer’s book?

Related: 8th grade books go great, they made a movie

Students learn why there are multiple interpretations of history by examining books that describe the same era but portray dissimilar events, ideas, and individuals.

Sample history analysis question: In Freedom Riders: John Lewis and Jim Zweig on the Front Lines of the Civil Rights Movement by Ann Bausum, do the two activists (a white northerner and an African-American southerner) have the same motivations and experiences?

Are the author’s reasons reasonable?

Eighth graders analyze arguments in nonfiction texts to determine if they are logical, relevant, and supported with sufficient evidence.

Sample nonfiction argument analysis question: In her biography, Steve Jobs: The Man Who Thought Different, author Karen Blumenthal says the title character “felt different from his classmates.” What evidence in the text supports this statement?

Eighth graders should prepare for class discussions by reading and researching material on the topic beforehand. Kids need to be able to share new facts in context so that their peers understand as well as answer their classmates’ questions. They also need to listen carefully to new information that’s shared and contribute their thoughts and opinions.

Eighth graders learn techniques to help them identify the precise meaning of unfamiliar words and phrases. Context — a word’s position in a sentence — can provide hints to its meaning. Greek and Latin roots, prefixes, and suffixes can also provide clues in determining a word’s definition. When context and word roots aren’t enough, eighth graders are expected to check dictionaries, glossaries, and thesauruses to figure out what a word means and how to pronounce it.

Another way eighth graders are expected to grow their vocabularies is by embracing related words — like synonyms, antonyms, homophones, homographs, and connotative words. Synonyms are words related in meaning (small, tiny, minuscule). Antonyms are opposites (wild/tame, happy/sad). Homophones are words with the same pronunciation but different meaning (scent, cent, sent). Homographs are words that are spelled the same but have different meanings (e.g. bat as in baseball bat or flying nocturnal animal). Connotative words carry a subtle meaning (e.g. conceited versus self-confident or frugal versus cheap.)

Sample context question: From the following sentence, what does negligent mean? “Zoe told her brother he was a slob because he was negligent in cleaning his room.”