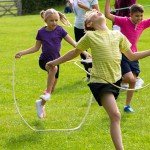 Exercise and the brain

Think that sweating only benefits the body? Think again. Find out what the latest science says about intense physical activity and how it can help your child learn.

If you could slip your child a side effect-free pill to boost academic achievement, wouldn’t you be tempted?

It turns out that there’s a safe, effective way to help kids improve learning, memory, concentration, and emotional resiliency — and it’s closer than you think.

Stumped? It’s not a drug, a pill or a “super food” but the simplest and most ancient of evolutionary imperatives: movement.

“It’s not drugs, it’s not a diagnosis, it’s so simple: it’s just being human!” exclaims Harvard Medical School psychiatrist John J. Ratey, when reached by phone at his home in Somerville, Massachusetts. His 2008 book Spark: The Revolutionary New Science of Exercise and the Brain, has become the bible for a new movement that is transforming the way schools approach PE.

Ratey, who co-authored the well regarded book on ADHD, Driven to Distraction, conceived of Spark back in 1999 after a decade spent reading neuroscience studies for his book, A User’s Guide to the Brain. “The neuroscience around exercise always fascinated me and since then the field has exploded.” He’d long been aware of studies suggesting exercise helped various mental health and concentration problems, but when he heard that schools in Naperville, IL had adopted a radical new approach to PE aimed at improving student learning, it cemented his decision. “They had a 3 percent obesity rate and test scores through the roof,” he explained. “I realized I had to tell this story.”

Exercise and the brain

Descriptions of brain function can be mind-numbing for those who missed neuroscience 101, but Ratey does a fine job of translating myriad neurological studies into an exciting story of discovery. He elucidates the three primary ways that vigorous movement changes our brains. Exercise balances the neurotransmitters — serotonin, norepinephrine, and dopamine — that regulate mood (and are the targets of many mood disorder medications). It also builds the cellular infrastructure — via a growth factor called brain-derived neurotrophic factor (BDNF), allowing us to make new connections and learn new material. Finally, it spurs neurogenesis — the cell growth necessary to grow the brain in childhood, and slow the natural aging process later in life.

For anyone who has experienced a fresh perspective and return of good humor after a jog around the neighborhood (or watched a similar phenomenon in their child after a game of tag), this isn’t earth-shattering news. Still, Spark offers parents a powerful road map for using exercise to promote learning. Exercise doesn’t simply makes us feel better, it helps us commit new knowledge to long-term memory, concentrate on difficult tasks, persist despite frustration, and correct mistakes in decision making. Such improved neurological benefits are not limited to kids who struggle with typical distraction, frustration, and mood swings, but has been shown to help those with clinical ADHD, anxiety, and depression as well.

Part detailed overview of the latest research linking exercise to improved cognitive function, part impassioned plea to apply brain/body science to our daily lives and those of our children, Spark validates the ancient Greek’s notion of the “athlete scholar.”

“Everyone always asks ‘what about the dumb jock?'” says Ratey. “My response is, what would that kid be like without sports?” Despite stereotypes associated with “ignore your homework, go for the scholarship” sports like football, Ratey says research suggests that fitness more often supports learning than detracts from it. “There’s overwhelming evidence showing that the higher the fitness level of a child, the higher the test scores,” he notes.

Spark offers a persuasive case for rethinking both our education system and our pharmaceutical response to mental and emotional problems — a thesis that has created a new career for its author. A dedicated runner himself, Ratey embraces the miraculous science of sweat with a convert’s zeal. In the wake of Spark’s success, he founded a nonprofit called SparkingLife.org, which advocates a fundamental change in school PE programs to optimize learning. “It’s a self-generating passion,” he says of his new mission — traveling the world in an effort to persuade teachers, principals, and superintendents to incorporate the new findings about exercise and the brain into their PE programs. “Every day someone contacts me — you can’t believe the letters I’ve received from parents whose children’s lives have been transformed by exercise.”

With a team of three PhD researchers, Ratey is currently working at multiple schools in the U.S. and Canada, not only to help implement new programs but to study their effect on test scores, mental health, and other metrics. So far, the findings have been dramatic — especially in inner-city schools. At one high school in Barrie, Ontario, a new PE program for the schools’ “25 toughest kids” led to a behavioral and academic turnaround. “They went from 95 days of suspension to 5 days, attendance went way up, as did the grades,” explains Ratey.

The group also recently launched a large-scale project in the Los Angeles Unified School District, beginning with 10 schools that are transforming their PE programs and incorporating exercise throughout the school day. Ratey’s organization has also partnered with Reebok’s BOKS program, which is working at 120 schools in the Boston area and expanding to other metropolitan areas. This summer, Sparkinglife.org will offer its first weeklong training program for 75 teachers and administrators from around North America.

In a global setting in which obesity rates in children are either rising (Asia, Europe, Latin America) or already disturbingly high (U.S.), and children are growing glued to evermore enthralling screens, Ratey regards his mission as particularly crucial. “This is a worldwide phenomenon,” he says. “And schools have the responsibility to educate the whole child.”