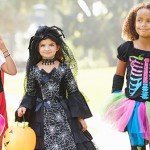 What a Halloween costume says about your child

Princess or assassin? Gory zombie or sexualized pop star? You may cringe at your child's Halloween costume, but here's why the most wince-worthy outfits make developmental sense.

Since summer, your child’s probably been debating this year’s Halloween costume. Princess or fairy? Batman or the Joker? Taylor Swift or Lady Gaga? Zombie with brains merely exposed, or oozing out of every pore?

Remember when they were toddlers and you could pick that cute bumble bee costume for them? Before you say boo about your child’s costume choices, take a look at why your little one is drawn to certain costumes. And no, it’s not just to spite you.

Princesses are the number one costume for 11 years running – and this year is no exception. According to National Retail Foundation, more than 3.2 million kids will be princesses. Why so many tiara-wearers in this democratic nation?

The princess ideal is ingrained in our culture — in fairy tales, early stories and songs, and, of course, the media. For young girls, it’s a quick concept to pick up. “Little girls are called ‘Daddy’s little princess’ from a young age,” says Sally Foster, psychology professor and dean of MiraCosta College. “Princesses are pretty. … She knows she’s favored when she’s called a princess. The title gets her positive attention. It gets her stuff, and she’s going to identify with that.”

But the root cause goes deeper, says Foster, and this helps explain more than just the princess phase. “Kids have very little power, if you think about it,” Foster says. Thus, it’s only natural that kids are drawn to personas with power for their costumes.

Shocked by your former princess’ desire to replace last year’s taffeta with blood, guts, and realistic wounds? There’s a national obsession with zombies: the undead have risen from number 22 last year to number nine this year on the list of most popular kids’ costumes. The gorier the better — especially for many tweens. Why? The economy is struggling, money is tight, parents are out of work, neighbors are losing their homes, and basic necessities can no longer be taken for granted; stress is taking its toll on all family members – and tweens and teens can bear the brunt of frustrating circumstances they have a galling lack of power to change.

Zombies made their pop culture debut during the Great Depression — giving disillusioned people an outlet for their fear and anger — and it’s no surprise that they’re back with gusto now.

But even without our tough circumstances lately, Halloween has always offered teens a time to grapple with their dawning awareness of life’s crueler realities. Halloween literally translates to “all hallowed evening,” and it’s a day to celebrate the dead. “Death scares us,” Foster says. “We slow down at accidents, horrible events in the news catch our attention, and it’s a psychological construct that one way to diminish fears is to become that which you fear.”

In other words, when you become the grim reaper, your fear of the grim reaper abates — if only a little. “I think there’s a certain amount of healthy identification in the fear costumes,” Foster says. So if your kid wants to give himself a bashed-in head, realistic gashes, and repulsive wounds, it may actually help him overcome the fear and build resilience and courage.

“Put your hands up!”

Some kids will turn anything — twigs, bananas, their own hand — into a gun. In day-to-day life, most parents can handily disarm their children, one pointed stick at a time. But at Halloween, the violent costume and its accessories present a different challenge. What do you say to the kid who wants a toy gun to match his cowboy outfit? Should a parent put their foot down or let the kid have their way?

Before putting the kibosh on all violent costumes, Foster recommends seeing it from the kids’ perspective. Most of the underlying themes for violent costumes emerge from well-known cartoons or stories. “It’s good versus evil,” Foster explains, “And kids identify with it — either side.”

Kids who want to be superheroes are identifying with the “good guys,” and the kids who want to be “bad guys” are using their costume to help overcome something they fear — just like the kids picking super gory getups, according to Foster.

Either way, it’s another example of kids opting for powerful characters. “Kids are always being told what to do,” Foster says. “By identifying with a more powerful persona, [it’s like saying] maybe one day they can be in charge.”

Isn’t she a little young for that?

“It’s shocking,” Foster says of the trend of sexing up kiddy costumes. She maintains that it’s “up to parents to control” what their kids wear for Halloween to keep their kids safe.

Even traditional kid favorites, like Tinkerbell, witches, and angels, (all in the top 20 costumes for kids this year) come in eye-poppingly vamped-up versions.

For younger kids, Foster says, “a grade school child’s probably not even aware of what these costumes suggest. Parents are ultimately in control.” It’s up to parents to exercise that control by not buying in — literally — to the sexed-up costume market.

For tweens and young teens, it’s more complicated. “You’re more likely to see a tween select [a vampy costume] for herself,” Foster says. “She wants to be like the older kids. That sexiness is all about popularity. It’s up to the parents to help the daughter manage the image she’s putting forth.” Thus even with the costumes that parents can’t abide by, Foster contends there’s still a silver lining: “It’s a parenting moment.”