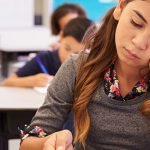 7th grade: The worst year ever

Did you hate seventh grade? You're not alone. But as a parent, there's plenty you can do to make seventh grade better for your child.

It’s a commonly held truth that no three years are as miserable in an American child’s life as middle school. But those three years, so awkwardly sandwiched between elementary and high school, are not created equal. The top contender as middle school’s worst year, in all of its cringe-worthy, hormone-infused, brain-addled confusion is seventh grade, a tween’s annus horribilus.

Having survived the sixth grade gauntlet of adjusting to a new school and several teachers rather than just one, seventh graders awaken to find themselves in an even more disquieting new reality in which inexplicably, their parents suddenly are intolerable, their teachers hard-hearted brutes, and the only ones who understand them are their BFFs, who may turn on them at any moment. In fact, as any 12-year-old Hunger Games devotee will insist, pretty much everyone may be out to get them.

“It was like I was a hunted animal,” recalls one mother of her seventh grade experience. Never bullied before or after, she recalls that the year unfolded like a horror movie replete with furtive trips down empty hallways, being chased by rabid gangs of girls, and echoing nightmares. So great was her trauma from seventh grade that she chose a tiny middle school for her older daughter where there were too few students for tween peer culture to ever properly take hold.

Is it really that bad?

Surely, this is an exaggeration, a pop culture cliché about what the middle of middle school is like? In fact, attests tween expert Annie Fox, author of Teaching Kids to be Good People, “Seventh grade really does suck.” Fox, who has been answering thousands of tween and teen emails since 1997, is intimately familiar with the reality of what it is to be a 12- or 13-year-old seventh grader. “It’s not necessarily new that it sucks,” Fox points out. While one percent of the population swears they loved junior high or middle school, Fox says that for the remaining 99 percent, seventh grade is often the year kids feel like the rug is pulled out from under them.

“Seventh grade really is the worst year ever,” agrees Jennifer Powell-Lunder, a psychologist at Pace University who specializes in tween development. Once self-assured, happy kids become encumbered by new feelings of embarrassment, isolation, depression, and, for girls in particular, a loss of self-esteem. The reason, says Powell-Lunder, is a simultaneous onslaught of intense social and academic pressure.

Seventh graders also undergo intense cognitive, physical, and emotional changes that unearth uncomfortable contradictions. They aren’t little kids anymore, but they aren’t big kids yet, either. “Seventh graders experience middle-child syndrome,” explains Powell-Lunder, “You’re not special anymore. You aren’t so cute anymore. You’re no longer sixth graders who get a healthy dose of coddling so they can adjust to middle school. You’re not the glorified eighth graders who are focusing on getting ready for high school.”

On the home front, seventh graders often push their parents away, while desperately needing emotional support and clear boundaries. Parents must navigate contradictory impulses that make seventh graders downright perplexing. Both self-doubt and self-aggrandizement often simmer just beneath the surface, as kids try to figure out who they are and what they believe. The biggest agent of change? Puberty, which accelerates for many (but not all) kids during seventh grade.

Powell-Lunder explains that a seventh grader’s social success often depends on physical maturation, which is tough when some kids look like they’re 10 and others 16. It’s unfortunate timing to suffer the indignities of acne, hair sprouting in new places, and awkward growth spurts just when you’ve never felt more self-conscious in your life.

“There’s no other time in a child’s development, aside from ages 0 to 2, that kids go through so many developmental changes,” says Powell-Lunder. As with ages 0 to 2, when kids walk and talk at different times, at the height of adolescence, development is uneven. “You might have one kid who is socially savvy and looking at the opposite sex, and for another kid, that’s the last thing on their mind.”

Kids who haven’t started puberty yet may feel left in the dust. Boys who lack physical prowess often land at the bottom of the food chain. For girls, puberty can be the great inequalizer. “Different levels of sophistication seem to show up in seventh grade, far more than sixth grade,” says Fox. “In seventh grade, some girls may have gotten their periods and started developing. What you wear becomes a sign of how cool you are, and it can be very form-fitting. The girls really don’t understand the message in dressing this way. These seventh grade girls push the limits in sophistication and sexiness.”

In this sea of change, peer relationships become vastly more important and complex. Peers, not parents, rule their world, which puts them at the mercy of the mercurial, at times malicious, whims of classmates. More than other middle school years, says Fox, “there’s more competition for social status in seventh grade,” which is a veritable Versailles, with the kid courtiers constantly sizing each other up for the proper way to dress, speak, and act. Throw social media into the mix, says Fox, and kids never get a break — they live in the unrelenting social spotlight 24/7.

“I refer to seventh grade as the tween mean year,” says Powell-Lunder. In seventh grade, queen bees get their ruthless groove going, says Powell-Lunder, and top-of-the-heap boys perfect their craft of sending socially awkward boys who aren’t into sports or who don’t present a conventional version of masculinity to the bottom of the social caste.

For girls, close friendships from early childhood often fall apart. Fox says this “girl friendship drama” is a way of “trying on what it’s like to be older and more sophisticated and cooler. ‘I can’t be friends with you anymore.’ There’s a level of cruelty and a lot of backstabbing. With girls, they do it with a smile on their face: ‘No, I never said that.’”

“Then because you’re so unsure of how acceptable you are, you start posing,” says Fox. “And you don’t stick around with your old friends because they know you’re posing. So you hang out with new people. And then you’re encouraged to be fake. Plus, Mom and Dad know the fakery, so for the kid, they think, ‘I also have to keep you at arm’s length.’”

At the same time that seventh graders are trying to figure out who they are and how to fit in, their schoolwork starts to look less like elementary work and more closely resemble a high school curriculum. The expectation on the part of many parents and teachers, says Powell-Lunder, is that seventh graders should have their more difficult academic challenges pretty much nailed. “There’s more tolerance for sixth graders messing up,” says Powell-Lunder, but by seventh grade, “you’re supposed to have it all figured out.”

“In seventh grade especially, we expect kids to have a high level of organization and attention to detail,” says Powell-Lunder. “The life raft is gone and they’re on their own. So if a kid is neat and organized, she will do well.” But if a child doesn’t have that skill set – like the kid who can’t figure out which books to take to their locker – they’re in a tough spot.

This is precisely what happened to Todd David’s son Noah. “Seventh grade was so bizarre, just the worst year,” said David, noting that up until that year, his son had been a responsible, highly academic kid. “Suddenly in seventh grade, it seemed like the synapses didn’t seem to be firing correctly. He was in a fog and completely oblivious to the world around him. His mom and I would ask, over and over. ‘Did you remember to bring your lunch?’” Sure enough, says David, time and again, Noah forgot his lunch.

More troubling was how dramatically his son’s school work went off the rails. “The communication between what we would hear from Noah about what was going on in class was 100 percent different than what we’d hear from the teachers.” When his son’s grades dipped far below par, David and his wife contacted Noah’s teachers. “They’d say, ‘Oh, Noah hasn’t done his work.’ So we’d ask Noah why he didn’t and he’d say, ‘I didn’t know I was supposed to do that.’” Despite seventh grade being the Bermuda triangle of school years, David was relieved that by the second semester of eighth grade, the pod person that temporarily inhabited his son’s body had disappeared and his great kid was back — more mature and tuned in to school and life.

According to Fox, this rocky developmental phase often correlates with academic struggles. By the time kids come back from summer vacation after sixth grade, the academic pressure changes a lot of kids’ daily lives. “There’s lots of homework in lots of subject areas. You even find lots of seventh graders who are sleep-deprived because they just don’t know how to juggle it all.” In turn, says Fox, because the adults in seventh graders’ lives get anxious that they aren’t up to speed, “You start to see more parent and teacher conflicts with kids in ways you may not have had before.”

The best medicine for growing pains

So what’s a parent to do staring at their seventh grader in the throes of what they may look back on as one of the toughest years of their childhood?

Finally, Fox encourages parents to take the long view. Seventh grade may be a trial for your child (and for you), but soon enough, your pre-adolescent child will be entering eighth grade, planning for high school, and looking back on their early years of middle school as oh-so-behind-them. While a tough truth for any loving parent to accept, it’s worth remembering that seventh grade is also a rite of passage. Most kids learn a lot from this year (even if they don’t master equations). Thrown into the academic and social tumbler of seventh grade, kids emerge despite and because of those growing pains with a much clearer sense of who they are.