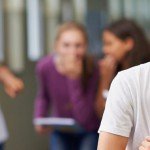 What do parents really need to know about bullying? It's not necessarily what you think.

Not a day goes by without another gut-wrenching tale of bullying making headlines. Schoolyards erupt in violence. Social media sites turn into cyber lynch mobs. Kids commit suicide after enduring months of abuse. Despite all the media attention, parents often remain in the dark about what actions to take when it happens to their children — or when their children bully others.

What can parents really do? What are the signs to watch for? How do you distinguish garden-variety personality conflicts between kids (which may include some mean behavior) from actual bullying? We contacted clinical psychologist John Mayer, author of Creating a Safe and Welcoming School and multiple memos on bullying and teasing, to clear up the the common misconceptions about bullying and give parents the facts.

The case for fighting back:

In some scenarios, “fighting back” in the form of verbal retorts and, when warranted, physical force can put an end to bullying. But it’s important to consider the child, the situation, and the consequences (see above). Simply telling a scared child to fight back isn’t enough. Ultimately, it’s about safety. Martial arts and boxing training are two great ways to help a child prepare for — or even prevent — being victimized by a bully.